Rare is the moment that a DC-3 is ever fully together. The chances are pretty good that whenever a DC-3 is parked that its motor cowling has been removed and skilled hands are probing throughout its radial engine. Keeping an 80-year-old airplane airworthy relies on a keen sense of doing what’s been done for decades.

There are three DC-3s in Florida Air Cargo’s fleet. All three are parked smartly on the ramp at Miami’s Opa-Locka Airport. On any given day one of the three will standout with exposed engines.  It’s a sign that company mechanics are probing the fourteen cylinders on each motor and performing routine repairs.

The secret of keeping a vintage airplane in the sky is the result of what happens on the ramp every day. Flying is a maintenance-intensive business.  Therefore it’s a huge benefit having wizards familiar with the airframe and engine of a bygone era.

Danny Cruz, who has been with Florida Air Cargo since 2016, finds guidance in a repair manual published in 1947.  The thick leather-bound tome is as detailed as it is scholarly ornate. Danny even has instructions on how to make factory recommended tools for the upkeep of the DC-3. These tools and others see action with Manolo Meana and Junior Forchin, two mechanics who have repaired virtually everything on the airplane, with the exception of its shadow.

On any given weekday the crew is attending to an array of airframe and engine checks. Invariably the check requires an engine start, complete with smoke and noise.  One of the peculiarities of radial engines—particularly ones that have been idle for a while—is that lubricating oil collects in the lower cylinder chambers. The multi-chamber motor requires upwards of 13 gallons of oil to lubricate valves and cylinders. This means the motor coughs up a cloud of exhaust at the first revolutions of the propeller, thereby clearing the oil-soaked cylinders and assuring an even flow of lubricant throughout the other cylinder heads. Within minutes, both oil and engine find a common temperature range; the resulting drone is the sound guaranteed to make any mechanic smile.

Finding the sweet spot in engine idle is also a shared experience. Some of the company’s pilots are also rated mechanics.  Capt. Keith Kearns is the airline’s director of operations.  He, along with CEO Sergio Alen, have long backgrounds in airframe and engine maintenance. Hence, roughly half the airline’s employees have maintenance credentials, which in light of the flight hours on the fleet, understates the importance of repair and upkeep.

Keeping 80-year-old airplanes in the sky also requires easy access to replacement parts. As is to be expected, finding parts for the DC-3 entails a search across the country and even to other countries.  As a result, the airline has assembled a substantial inventory of spares. The accumulation of parts is the largest in North America, and possibly the world.

There are several DC-3s still flying.  In 2019, more than thirty participated in the flyover commemorating the 75th anniversary at Normandy Beach. Estimates vary, but most aviation enthusiasts note about 100 of the DC-3s are still in active use within North America.

Getting the old girl in flight fettle requires dedication and resources. At Florida Air Cargo the renewed life of the DC-3 is brought about through the efforts of the company’s men on the ramp. In turn, they’re viewed by a grateful audience of followers who welcome seeing the world’s high-time airplane remain airborne. 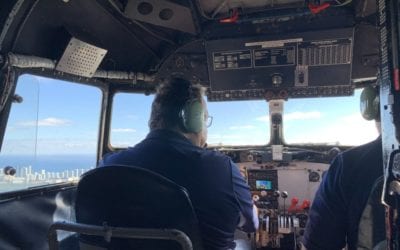 Are You Shipping to Nassau Bahamas

END_OF_DOCUMENT_TOKEN_TO_BE_REPLACED 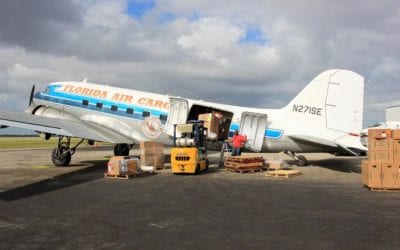